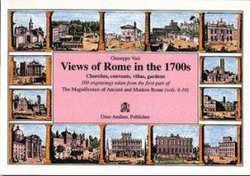 Churches, convents, villas, gardens 100 engravings taken from the second part of. The Magnificence of Ancient and Modern Rome (vols. 6-10)

By presenting 200 numbered prints that form the main part of Delle Manificenze di Roma Antica e Moderna by Giuseppe Vasi (1710-1782), originally published in 10 volumes between 1747 and 1761, we wish to recreate the urban structure of the capital of the Christian world at the point when it was becoming a "modern" city, endowed by popes and patrons with the public works and places for social interaction that sered to enhance both the look of the city and its spheres of labour and commerce.
Though the artist, in his lucidity of vision, his lively down-to-earth sensibility and the documentary quality of his engravings, showed his openness and sensitivity to the changing times, he nevertheless remained tied to the ancien régime tastes of the papal court and Roman society of the 18th century. His detached love of the city, his contemplation of antiquity and his feverish and original etching manner all fascinated the young Piranesi, who arrived in Rome in 1740. Piranesi took engraving lessons in Vasi's workshop but later eclipsed his master in quality and detail. Considering the cold, analytical quality of the city and the detailed views of architecture and monuments typical to the engravings of his predecessors, Vasi counters with views that are subtler and more poetically inspired.
In the second part of the opus (1756-1761), the engraver presents "the inner city", the most important sites in the inhabited centre: hospitals, monasteries, parish churches, collages and hospices, as well as the most illustrious villas and gardens. This part reveals the more "modern" aspects of the city, using a prosaic, realistic tone more in keeping with the calm, subdued quality of daily life.